YENAGOA, Nigeria March 10 (Reuters) – Counting in the vote to elect the governor of the oil-rich southern Nigerian state of Rivers was suspended on Sunday, the electoral commission said, following violence at polling stations and collation centres.

Voters went the polls on Saturday to choose governors in 29 of Nigeria’s 36 states, two weeks after a presidential vote in which Muhammadu Buhari won a second term at the helm of Africa’s top oil producer and biggest economy.

The governors are among the most influential politicians in Nigeria and many control budgets larger than those of small countries. Rivers is typically keenly contested because it is in the Niger Delta region that produces most of Nigeria’s crude oil, which accounts for two-thirds of government revenue.

Voting took place across Rivers on Saturday but the Independent National Electoral Commission (INEC) said in a statement that there had been “widespread disruption” in polling units and collation centres. There were no reports of disruption to oil production.

“The commission has decided to suspend all electoral processes in the state until further notice,” INEC said in a statement. It said it was concerned about the credibility of the process.

Rivers is a stronghold of the main opposition People’s Democratic Party (PDP). The PDP governor, Nyesom Wike, was seeking re-election and Buhari’s ruling All Progressives Congress (APC) was banned by a court ruling from fielding a candidate.

The British High Commission in Nigeria also expressed concerns about the vote in Rivers in a message on Twitter.

“Extremely concerned by reports, including from (British High Commission) observers, of military interference in the election process in Rivers State,” it said in a tweet. It also said in the tweet that Independent National Electoral Commission staff should be allowed to do their job in safety, without intimidation.

A military spokesman said in a statement the armed forces were apolitical and non-partisan as a professional institution.

In a separate statement, the Nigerian Army said it had received credible intelligence that armed “political thugs” had impersonated soldiers and carried out crimes.

Civil society groups on Saturday said turnout in the governor elections was low across Nigeria, in part due to a large military presence intimidating voters and apathy after the presidential election was delayed by a week.

Previous governorship elections in Rivers and other parts of Nigeria have been marred by violence, including shootings and the snatching of ballot boxes by armed gangs. (Additional reporting by Paul Carsten in Abuja and Alexis Akwagyiram in Lagos; Writing by Alexis Akwagyiram; Editing by Kevin Liffey and Jane Merriman) 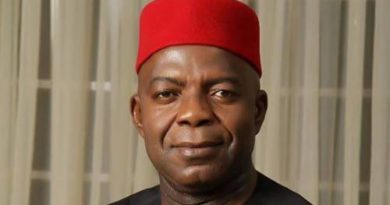 David Talbot on how journalism has changed: “I wouldn’t have been able to start Salon today”