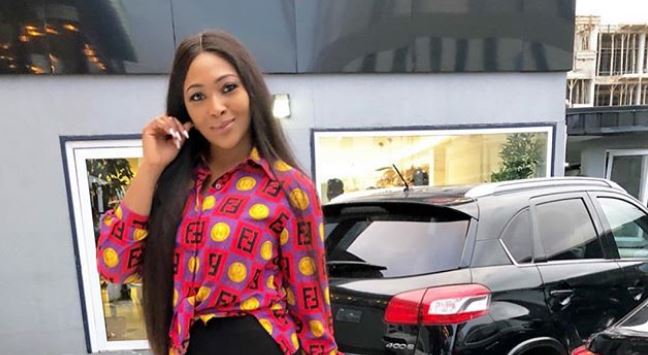 Pretty Nollywood actress, Lilian Esoro, is doing well for herself even without the support of her ex hubby, Ubi Franklin.

Since parting ways with her husband, Lilian has moved from grace to grace and she is not taking anything for granted.

The actress recently acquired a new whip and she stylishly flaunted it on social media showing how nice God has been to her and still counting more.

Olivia Jade Breaks Silence in First YouTube Vlog After USC Scandal: “I’m Terrified to Make This Video and Come Back”

**I AM FOR EVERYBODY AND FOR NOBODY!**

When President Muhammadu Buhari came to power, he made a statement that astonished almost everyone including critics “**I AM FOR EVERYBODY AND FOR NOBODY”**. In his first day in office, workers that were found of late coming were in office before 8am, those that stole in the past administration started returning part of what they stole. I was like: THIS IS GREAT! NIGERIA IS TAKING SHAPE! Then Boom! It took six months for the president to assemble his ministers! Suddenly, we discovered same old faces! Oh shit! I became sad. Boom again! His wife came on air to say there were cabals preventing the administration from achieving its core objectives and she was scorned. Then came the issue of nepotism, then came herdsmen and farmers clashes, then banditry. Oh my God! It has been five years of dashed hope for me, some of my fellow comrades have quitted political analysis and hoping I do same BUT I LOVE MY COUNTRY, I CAN’T KEEP MUTE! **I AM MR. NIGERIA**

PLEASE, PRESIDENT MUHAMMADU BUHARI, I BEG YOU TO RETHINK, FIRE WHO IS NOT FOR THE GROWTH OF THIS COUNTRY! bring in men and women who can give result and end your administration in a way the people you serve will indeed say **YOU** **ARE FOR EVERYBODY AND FOR NOBODY **because when your administration is over no one will remember your ministers, DGs or SSAs but you alone. Take charge sir, develop political will and make Nigeria great again because all that has ever been, all that is and all that will ever be is a function of our mind power given to us by the creator to make NIGERIA a sane place to live in!

My name is comrade Eromosele zillian Peter’s, an Ambassador @ Greater Accra Region on youths and sport 🥎 who is showing me to my duplex? Pls I need Pounded yam and egusi soup with cow leg and assorted meat👌 with one cold bottle of red wine 🍷 the youth done come✅ Na the youth be this 🙌🙌 ... See MoreSee Less

I will bring it down for u bro

Sweet heart u are welcome

Come and have it

It's pizza that awaits you

You are welcome bro

Please use the boys quarter

Watin come be this one mugu