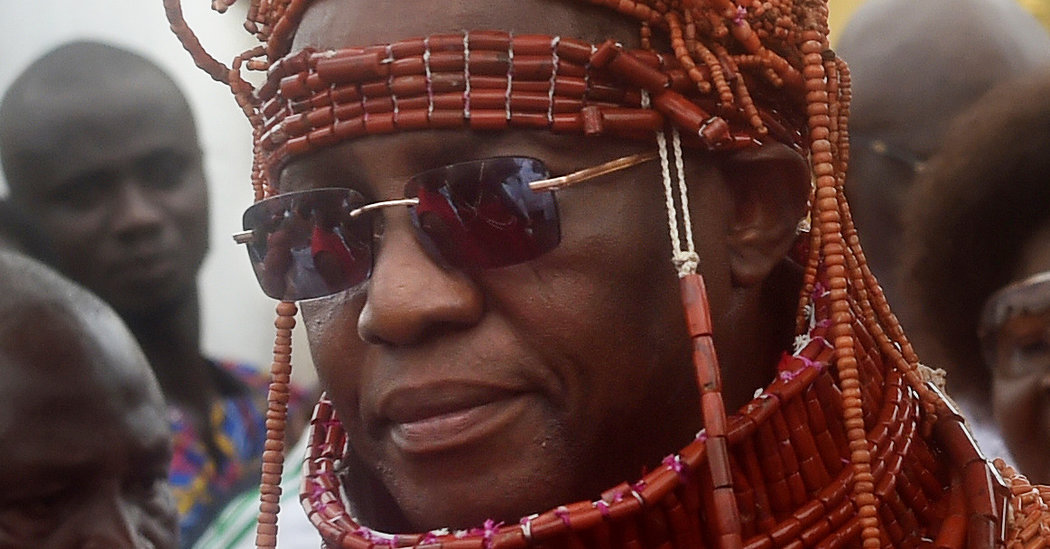 ABUJA, Nigeria — Human traffickers have officially been cursed. On March 9, Oba Ewuare II, the traditional ruler of the kingdom of Benin, in southern Nigeria, put a voodoo curse on anyone who abets illegal migration within his domain. At the same time, he revoked the curses that leave victims of trafficking afraid that their relatives will die if they go to the police or fail to pay off their debt.

Before being smuggled into Europe, women and girls in the area, which falls in present-day Edo State, are made to sign a contract with the traffickers who finance their journey, promising to pay them thousands of dollars. The agreement is sealed with a voodoo, or juju, ritual, conducted by a spiritual priest, known here as a native doctor. Pieces of their clothing, fingernails or hair are mixed with drops of their blood into a concoction that the women are made to drink.

The oba has authority over all the spiritual priests in the Benin kingdom (not to be confused with the West African country of Benin). He summoned them to his palace that Friday to make his announcement.

David Edebiri, a high-ranking traditional leader, was there, and described to me what happened during the ceremony. First the oba “released all those bound by juju.” Then he put a curse on the head of any priest who makes “any concoction for anybody with a view to promoting any immigration to any part of the world.” This curse, Mr. Edebiri told me, “manifests in various ways: Some may die mysteriously, some may go mad in the street.”

What the oba has done is likely to be more effective than anything the international anti-trafficking community has managed to do after millions of dollars and many years.

The Benin kingdom of the Edo people has a proud history dating back to the 13th century. But lately Edo State has gained notoriety as a hub of sexual exploitation. According to the United Nations, over 90 percent of the thousands of women taken from Nigeria to Europe to work as prostitutes are coming from Edo.

Edo is not one of Nigeria’s poorest states. But in the early 1980s women there started traveling to Italy to trade in gold and beads, and “saw a thriving market in prostitution,” said Kokunre Agbontaen-Eghafona, a professor at the University of Benin and a researcher for the International Organization for Migration. She believes this “founders factor” is the main reason Edo has become such a center of human trafficking.

During a reporting trip there in 2016, I came across heaps of secondhand winter clothes for sale to those planning to make the journey to Europe. I also met girls who had traveled thousands of miles to find a trafficker who would send them there.

The oba’s intervention was probably motivated by a recent CNN series on human trafficking that focused on Edo. Mr. Edebiri said that the portrayal of the kingdom as a “den of illicit activity” outraged him and his colleagues. Around the same time, Julie Okah-Donli, the director of Nigeria’s National Agency for the Prohibition of Trafficking in Persons, paid the oba a visit. She said she told him that it was difficult to prosecute traffickers because the victims worried about breaking their oaths.

The fear of these oaths and their supposed consequences is one big reason women remain enslaved in sex work and debt bondage; they often rebuff attempts by activists to set them free.

A native doctor named Olor Elemian boasted to me: “I don’t need to collect the girls’ photographs or fingernails or anything else as other native doctors do. All I need is for them to bathe naked before the shrine and to write out their full names.” Sitting on the floor in his shrine amid calabashes, animal bones and bloodstained cloths, Mr. Elemian, who inherited the job from his father, said: “I can make sure that she never sleeps well or has any peace of mind until she pays what she owes. Something in her head will keep telling her, ‘Go and pay! Go and pay!’”

In Edo, I also met a 25-year-old woman who was deported from Italy but who along with her family remained petrified by the consequences of her unpaid debt. Her mother eventually borrowed yet more money to pay a native doctor to undo the oath her daughter had taken before she was trafficked.

“This belief in juju has been a strong impediment to our prosecution” of traffickers, Arinze Orakwue, a top official at the Nigerian anti-trafficking agency, told me. “You can’t prosecute when nobody is willing to come forward to say this person did this to me.”

His agency expects Oba Ewuare’s pronouncement to have a significant impact in all of Edo. The oba’s decree “is a very strong weapon to support anti-trafficking,” Mr. Orakwue said, because the Edo people’s “belief system is strongly rooted in traditional worship.”

The agency’s appeal to the oba is an example of using African solutions to solve African problems. Well-meaning foreign governments and groups can continue to inject millions of dollars into Africa to fix our problems, but those interventions would be much more effective if local people and customs were more deeply considered.

It is all well and good to imagine Africa as a Wakanda, where technology rules and everything works. But Africa is not a Wakanda. At least, not yet. We must use what Africa has today to get it to where we want it to be.

After Onnoghen, SERAP Asks CCB To Provide Asset Declaration Details Of All Presidents, Governors Since 1999